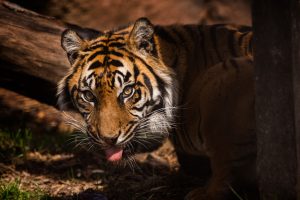 Topeka, KAN- The Topeka Zoo will say goodbye to Jingga , a female Sumatran Tiger on Tuesday, December 7, 2021. Jingga is leaving per Species Survival Plan (SSP) recommendations to pair with a male tiger at another Zoo. Her new home zoo will announce her arrival once a standard quarantine period is complete.

Jingga was born at the Sacramento Zoo on March 18, 2010 and arrived at the Topeka Zoo on June 13, 2012 after SSP recommendations paired her with male tiger, Rojo. Here, she was a mother to two sets of cubs. First, three cubs with Rojo in 2014. For her second set of four cubs in with Sanjiv 2018, the world was able to watch along via a 24/7 online live stream.

“Please don’t tell the other animals but Jingga is my favorite. She is so fun to work with,” says Shanna Simpson, Animal Curator. “She is always excited to see her keepers, she is smart, and inquisitive. She has always trusted us, allowing us to weigh her one day old cubs,” Simpson said.

Managed by the Association of Zoos and Aquariums (AZA), Species Survival Plans (SSP) provide recommendations for pairings of animals with special attention to gene diversity in order to uphold the sustainability and genetic variation of that species. They make these recommendations based on age, health, and the need for more of the species to protect future populations.

“We are so sad Jingga is moving but she will be in good hands at her new Zoo. We have a good relationship with her new keepers and will be getting updates often.” Simpson said.

Sumatran Tigers are listed as critically endangered. There are believed to be less than 500 individuals in the wild. Main threats to the species include: poaching, prey depletion, tiger-human conflict, and disease.

The Topeka Zoo participates in many Species Survival Plans, which sometimes means saying goodbye to animals for the good of their species. As Jingga settles into her new home, she will reach and inspire a new group of people who are sure to love her as much as many did during her time in Topeka. Guests wishing to bid her farewell can visit her through Monday, December 6, 2021.